Today on the Dining Diaries….

Latin music transports us,
Wonderful flavours “wow” us and
We interact with passionate staff who treat us like old friends. 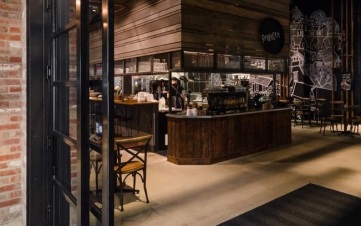 Diners today we were at Panacea at Marion.

I must admit, this was the place I was most interested in when the Westfield Marion addition/development was revealed.

I just love the look of it!
Lots of red exposed brick, wood and iron giving it possibly and industrial look? I’m not up with decor but I do know what I like and what makes me feel comfortable and at ease and this place does it for me! 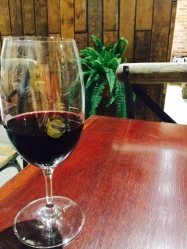 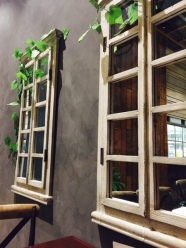 We were greeted but lovely staff, handed some menus and went to take our seats.
The choices on the menu were a little different to what we were used to but they did seem really good and we had a bit of a hard time deciding what we were going to go with.

In fact out lovely waitress came and went a few times while we were still trying to decide what to eat and drink and that’s not usual for us! She was patient and answered all the questions we asked about both the restaurant and the food.

Finally we decided to start with Meatballs – pork & veal cooked in a rich tomato sauce,  as suggested by our waitress, and also a serve of Patatas Bravas – crisp fried potatoes with fresh salsa & sherry vinegar.
For main I chose the fish of the day special  – Atlantic Salmon – and hubby, much to my surprise, went for the Gnocchi. Unfortunately, I didn’t write down how it appeared on the menu and it’s not on their online menu so I can’t tell you exactly what it came with, only that it had cauliflower and cream in it as well. 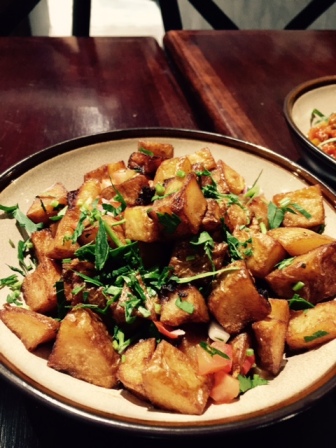 How good do those potatoes look!!!

The salsa doesn’t look like much but it gave those potatoes such a unique flavour.

I wish I was experienced enough to tell you what herbs and spices were used, but whatever it was, it was just a magical pairing.

The potatoes were crispy on the outside yet soft on the inside and that salsa was sweet and just so delicious!

I was so glad we’d chosen this…. and equally glad I had taken my half and put it on a separate plate before hubby got his hands on it… 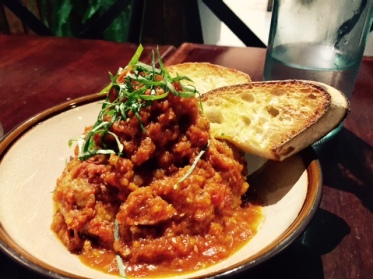 Our second starter was the Meatball dish as suggested by the waitress.

We had four good sized meat balls on this plate and they were as tender as you can imagine and full of flavour.

What I loved most of all though was that sauce!! The tomatoes were so fresh and sweet. It was so lovely to eat and the bread they brought out with it was crispy and toasty warm. I wish they’d given us a bit more bread actually!
It was a wonderful way to start and I was super excited to see what would be coming out next….

I’m pretty sure my choice was the best out of our two mains. 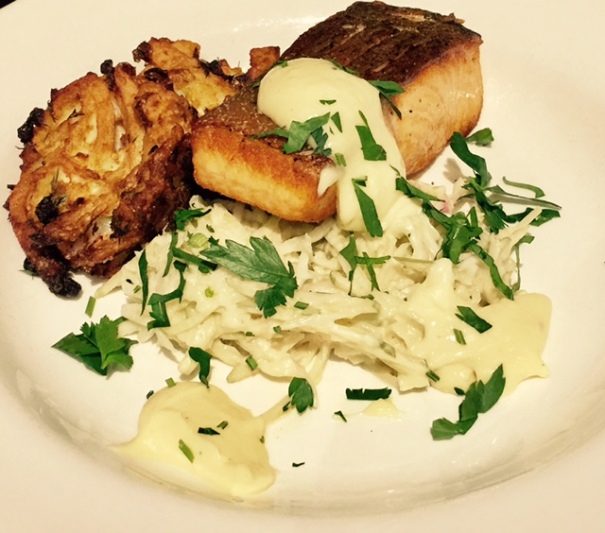 That salmon could not have been cooked better. The skin was crispy and the inside was just perfectly cooked. It looks like a small piece of the plate but it was really deceivingly substantial. I was really hoping hubby wasn’t going to ask me for more (I did let him have a teensy taste) 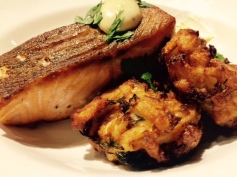 The potato rosti was also a great accompaniment.
I’m not a huge fan of hollandaise sauce myself as I usually find it too thick and too creamy but they had a generous amount on here for those that do.

Because I loved this so much I thought I’d show you another picture of my dish from a different angle. See how big that serve is?

Again the herbs and spices used were just perfect. I’m not a big fan of coleslaw but if you do like it, you would have loved what was on my plate. It was very creamy and I felt my hips widening just looking at it! 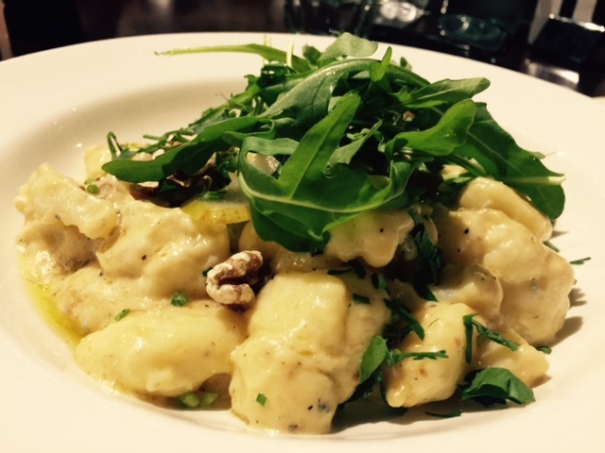 It was a little bit deceiving because he would go to get what he thought was a gnocchi, and it would turn out to be a piece of cauliflower.
He too said the flavour combinations were amazing. Pairing gnocchi, caulifower and walnuts is probably a brave thing to do but it really worked, especially when covered in that gorgeous creamy sauce.

One thing I was disappointed in was that I didn’t notice the Sangria on the drinks menu until we were well into our mains!!
There are also a good selection of pizza’s on the menu and I’m curious to see how they taste.

When I went to pay the bill, I told the server that everything was really good, the owner heard and came to tell me about some of the other food  items on the menu and to talk about his personal favourites, and then the chef came out too to hear what the feedback was about the food. Their passion really shines through and I loved seeing that!

Panacea, I will definitely be back and this time it will be for Pizza and Sangria!!

Have you been to Panacea?
What did you think?
Let me know in the comments below!