As you can tell from my title I’m completely delirious.
These next series of entries will be mostly about our current travels but I will try to keep them food related! 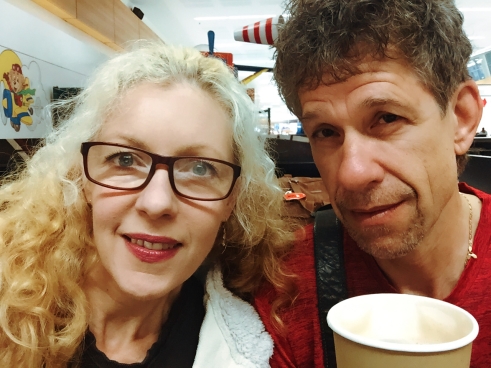 Hubby and I woke up bright and early this morning to board our flight to Cairns. We’re headed to the wonderful country of Japan again but decided to spend a day in Cairns to break up our flying time.

I think the plane was lacking oxygen as hubby and I had a few strange exchanges on the way over…
Hubby : No boobs but you make up for it with your nice back. Baby got back
Me: You got the boobs in our relationship (and I then proceeded to squeeze his chest while saying “honk honk”)

Cairns was just as lovely as ever and after getting our hire car, we went straight to the beach and walked around admiring our favourite spots while having a heated discussion about Gay Marriage. Never a dull moment…

We were pretty hungry and decided to stop in at a past favourite, “Rattle and Hum”
There’s just something about this place we like….
We were a bit naughty with our food selections…. 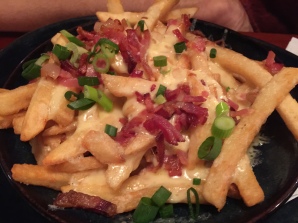 Very delicious!!
And from where we sat we could see lots of food going out. There were a lot of burgers that’s for sure.
The pic on the left is of a steak sandwich and that meat was just so tender!!! It was really lovely and sooooo sinful to eat!

After lunch we walked some more and did a bit of window shopping. We talked a lot about our trip to Japan… I’m looking forward to being there tomorrow….

I’m not quite sure what to say about our Air BnB experience in Cairns, suffice to say that if you’re not a people person, you probably shouldn’t book rooms in other people’s houses.
But it’s all good!! We have somewhere nice and clean to spend the night and will come back with lots of stories!

An hour or so later…

I really don’t want to say anything against our Air BNB host as she was… well she was herself and unfortunately it didn’t really mix with who we are.
We spent a couple of hours in that room in her apartment then decided we’d probably be happier if we were in a hotel room so, we moved.
I can’t explain the relief.
I can’t explain in this post what we didn’t like as I’d hate for anything to get back to our host. In her way, she tried her best, it was just not for us.

Back to food….
After a day of travelling,
lots of  walking,
dealing with the anxiety of wondering where we were going to sleep,
wondering if anyone would walk into our bedroom while we were sleeping,
(or into the bathroom while we were showering)
physical and mental exhaustion took it’s toll and made us not want to leave our hotel room.

After recouping in our hotel room, we walked to a nearby Woolies and got a couple of baguettes, some deli meats, sundried tomatos, olives, cucumbers and other goodies and made a jumbo size roll!!!
It was magnificent and really really hit the spot!!!

Tomorrow we’ll be in Japan where I’m sure I’ll have a bit of food anxiety but that doesn’t matter, that’s what being in a new culture is all about!

Today on The Dining Diaries… 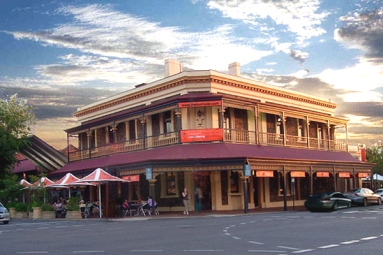 Diners today’s review is for The Lion Restaurant on Melbourne Street in North Adelaide.

I’m sure many of you are familiar with the restaurant, or if not, the bar alongside it! I know I’ve whiled away an afternoon or two in the bar in my time but had never dined in the restaurant.

I wasn’t really sure what to expect. I had imagined it would be a bit pretentious.
Hubby and I noticed a sign that said a dress code applied and luckily, we normally look quite spiffy so it didn’t worry us.

We came in a little after 2pm but were told they take orders till about 2.45pm so that was good to know! The staff were lovely and if they had judged us walking in, I wouldn’t have known but hubby thought we were being talked down to a little. One of the servers asked us if we were celebrating a special occasion and I said “No we just want to get some lunch” I wondered then if that’s something they ask everyone or did we look  like a couple of bogans, wanting to have a once off nice meal in a nice restaurant to celebrate something? I did notice the wait staff had good rapport with other diners and that was nice to see.

In any case, if they were judgemental I don’t think they were overt about it and we settled in and enjoyed our surroundings. It did feel a bit “special” in a seventies type way. I thought the decor was a little seventies but hubby said he thought it was more Scandanavian. He’s probably right. I’m not usually a good judge of these things.

We were given some menus and the wine list.
At first I wasn’t sure I wanted anything on the menu. Nothing really jumped out at me. Hubby and I were actually on the verge of leaving but I felt a little embarrassed to do that and in the end was glad we’d stayed. A lovely server went through the menu and answered any questions we had. She also told us about the specials and I couldn’t go past the fish special which was Snapper.
Hubby decided to go for his usual, steak. More about that later!

We started off with a couple of dips. The server explained what they were but I couldn’t  remember all the fancy bits. Basically one was a cauliflower one and the other was some sort of Potato combination.

I was pretty impressed when this came out! It looked like a decent serve. The dips themselves had a nice texture but I think they probably should have chosen different flavoured dips as they almost looked the same. The texture was the same and although they tasted different, by the end we didn’t really know what we were having.
They were very enjoyable though and had a lot of flavour!! I did really enjoy the dips and the bread and pita they served it with. The bread was toasty warm and the pita was crispy yet firm. Nice!

For main hubby ended up going for the Scotch Fillet on the menu, rather than the Steak special. Our server asked if he wanted potato puree or fries with his fillet. Hubby originally said puree, but after seeing a few other dishes come out, he asked the waitress if he could change and they graciously obliged. 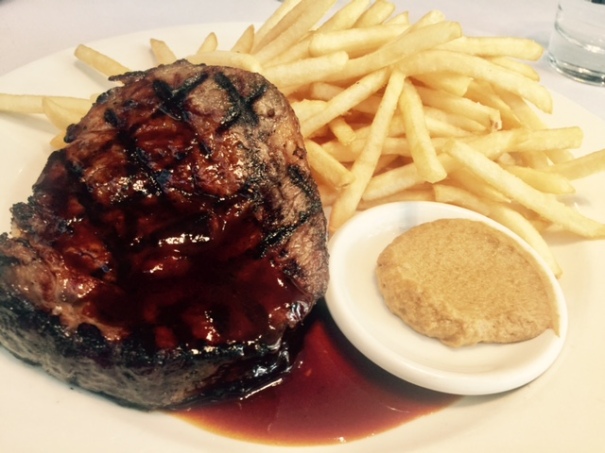 This Scotch Fillet was cooked perfectly! It was well seasoned and the mustard they provided added more flavour to the meat. There was also a decent amount of fries which made hubby very happy. I did wonder how it would have looked if he’d gone for the potato puree but he was very happy with his choice. I went for the Snapper Special.

Unfortunately I can’t remember everything that it came with but it was so very delicious! The Snapper itself was beautifully cooked and I can only be sad because I wanted more!
It sat on a bed of some type of homemade pasta, sundried tomato, fresh tomato, mint, fennel, goats cheese, sultanas and probably more herbs and spices. There was also something crunchy in there that made the texture of what I was eating interesting. The crunchy things looked a little like maggots though so I had to not think of that every time I put a bit in my mouth!

I just think this dish was soooo pretty it was almost a sin to eat it and the flavour combinations worked wonderfully! I loved the unexpected sweetness of the sultanas. The ratio of all those ingredients was really very perfect.

The wait staff were attentive the whole time without being over bearing, checking that our meals were ok and asking if we wanted more wine/drinks.

Although a little on the pricey side, I think they strive to give you a special experience and I would have no hesitation in recommending the Lion as everything we had here was cooked so very well.

Have you been to the Lion?
What did you think?
Let me know in the comments below!!