I slept like a baby last night! Of course it helped that the hotel’s air conditioning was on at full blast. 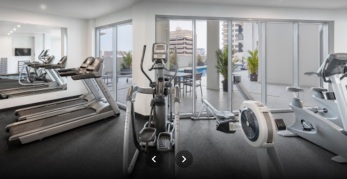 Darwin doesn’t have daylight saving so it was still quite early when I woke. I remembered the hotel gym opened at 6am so I decided to go down there early and get in some k’s on the treadmill before hubby woke up.

At 6.01am the gym still wasn’t open so I went down to reception to see if perhaps I’d gotten the time wrong.
I wonder if a guest has ever chased the staff about opening the gym before??

Hubby ended up coming down ninety minutes later and after a quick shower, we hopped into the pool to cool down.

We wanted to stay active and looked for a few things to do. We had wanted to go to the Aviation Museum but didn’t want to use a taxi or the bus. It was probably too far to walk with this humidity, so we decided to go to the “Qantas Hangar” instead.

The Hangar was about four kilometres from where we were staying and off we trotted on foot. I think hubby perspired at least ten buckets worth only to find when we got there, that we hadn’t really researched what the Hangar was….
I was more than a little disappointed but oh well, we got to talk to a few locals at the Parap shops and that’s always nice.

We saw a man waiting at a bus stop and asked him how soon the bus was coming. Lucky for us, there was one just about due and while we waited he pretty much told us his life story. Everyone has a story here! It was really interesting talking to him and it made the trip worthwhile. 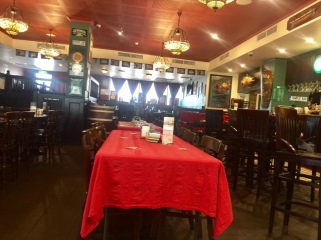 The bus took us right back to the Waterfront so we hopped off there to get some lunch. This time we were NOT going to go to the Hot Tamale.

Instead we ended up at Fiddlers Green.

The staff here were fairly friendly. They work hard to entice you in. 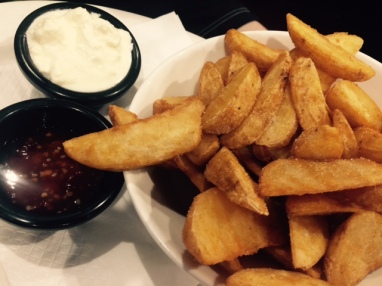 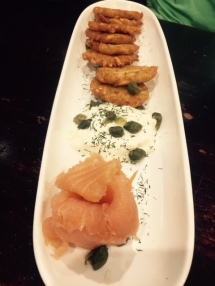 He absolutely loved the potato pancakes. “Why can’t you make them like that?” he asked. Hmmm, I’ll have to try harder. They were really delicious and I know because I was allowed a taste test! I think he allowed it so that I know how to make them…. 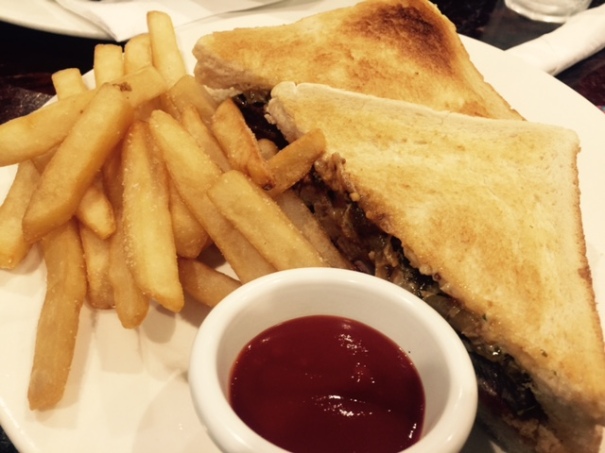 You just can’t go by a good honest steak sandwich. It was just what I felt like.
The steak was cooked well and the onions and mayo… just yum!
The dining room could do with a bit of refurbishment as a lot of it was looking a bit old and dated.
It was also just a little disappointing that they were so friendly when trying to get us in, but less so when we were actually in there. But, again, you get what you pay for and we couldn’t fault the food. 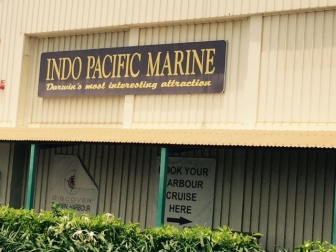 After lunch we continued walking and found ourselves walking past Northern Territory’s Living Marine Educational Discovery Centre where outside the building it’s advertised as being Darwin’s most interesting attraction with a quality coffee shop.

I didn’t take a picture of the Quality Coffee shop sign OR the Coffee shop itself… which is really too bad. I can vouch for it though because I saw a percolator on the counter.

Eventually we walked back to our room, changed into our bathers and spent a good hour in the hotel pool along with a couple of other guests.What a nice way to cool down!

We decided to visit Sky City Casino for dinner so after  refreshing ourselves in our room, we walked to the Casino. 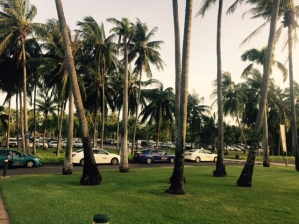 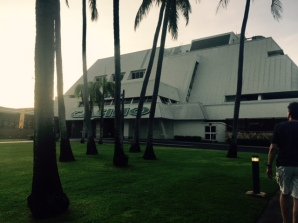 There are a few restaurants to choose from but hubby couldn’t go past the buffet.
We walked in and asked if we could look at the food before deciding if we’d eat here. Is that weird? The server kind of looked at us strangely so I guess she hasn’t been asked that question before! 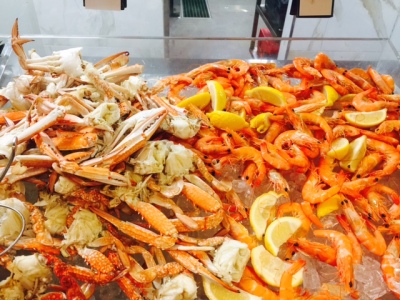 We saw SO MUCH seafood! We don’t even really eat seafood but we saw enough to know that this was the place for us.

What we did eat was so very tasty! It was really hard to slow down and enjoy but we forced ourselves because we wanted to try a little bit of everything.
My favourite was probably the special fried rice.
They topped up the food regularly and ensured everything we were having was fresh.
The views from the restaurant were quite pretty too!

Unfortunately, where our table was located, we were not able to enjoy the view with our dinner.

What we did have however, was a birds eye view of the dessert table, complete with a chocolate fountain! 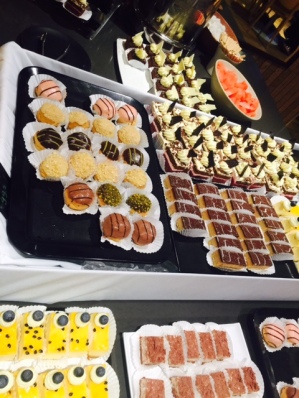 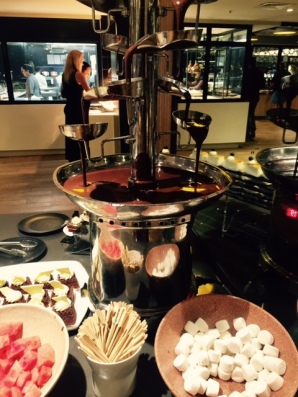 It definitely was a hit with the children!
What I loved about the desserts was that they were all small serves so we got a few things between us to share.
They also had a bread and butter pudding. One diner lamented the absence of custard to go with it “How can they have a bread and butter pudding without custard???” she exclaimed to me.
I just shrugged. There was cream and ice cream so that was good enough for me.

We finished off the night with a bit of luck at the Black Jack table. Hubby doesn’t do that often and I’m always nervous when he does but it usually works in his favour.

I don’t have a full day’s worth to make a “Day Three” post but it was pretty funny to see our taxi driver flirt shamelessly  with hubby on the way to the airport. It was like I wasn’t in the car at all!! I’m half expecting a facebook friend request to come through for hubby from the taxi driver… I mean there’s friendly and friendly….

I also have lots to tell you about the Qantas Club lounge that we were lucky enough to use. Qantas club, Business class tickets… I could get used to this life!!

So we survived a couple of days in Darwin during the wet season.
Have you been there?
What your experience been like? I’d love to know!!

Spoon You Fork Me/The Dining Diaries will be returning in the regular format from Monday the 16th of January.