Beautiful dining rooms, sadly devoid of diners,
A lamb pie worth bleating about and
When in doubt, choose a platter….

This gorgeous building is heritage listed and it was a pleasure just to walk into!

Lovely stained glass windows at the front while the back dining area has paved floors and lots of comforting wood! 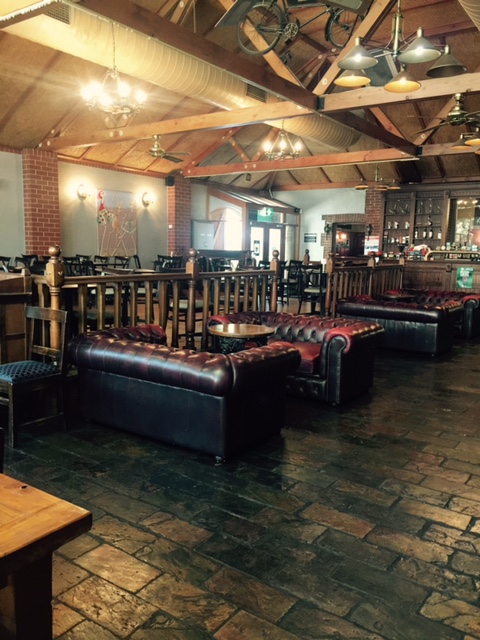 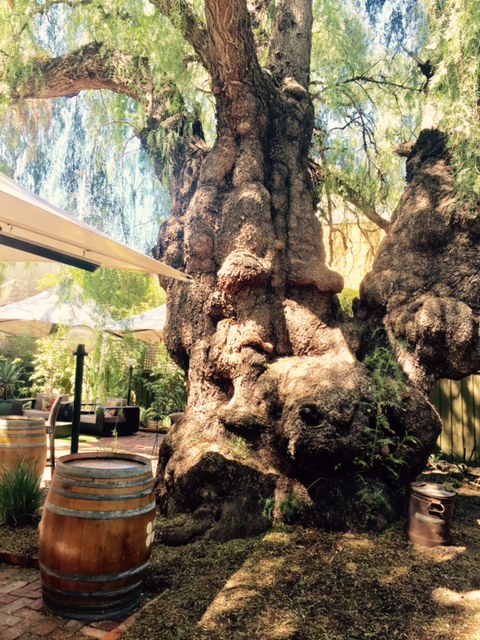 I want to also show you the massive tree trunk in the outdoor eating area!

It was too hot for us to sit out there today but from where our table was, we had a good view of it and I kept wondering if that’s what the  Far Away Tree from the Enchanted Wood would have looked like….

As I mentioned we felt completely comfortable and at home from the moment we walked in.
We got a couple of menus and settled ourselves at a table. A waitress came to bring us some water and I asked her a few questions about some of the menu items. She was very friendly and seemed genuinely wanting to speak about the food, instead of just doing a job and giving information.
I’m not sure if they are fostering a family atmosphere but that’s what it felt like!

I kept wondering where all the people were! Such a beautiful place, with nice friendly staff. They deserve to have more people there!
It was about 1pm on a weekday when we were dining there. Maybe it’s more a dinner and weekend type hotel.
For us as diners, I felt like we had the place to ourselves though and it was very relaxing.

After looking through the menu I decided to go for the Lamb and Guinness Pie. I could have had it as a “Floater” with mushy peas but even though I’m a true blue South Aussie, I just couldn’t do this. If you don’t know what a “Pie Floater” is you could always google it but just remember that once seen, it cannot be unseen….
The pie also came with Roasted Dutch Carrots and Gravy.

Let me tell you right now this was the best pie I’ve had in a long time! I don’t normally like gravy but it was just perfect! The pastry was light, the lamb inside was tender. Everything worked a treat! If I was a harsh critic I might have said the lamb was a little dry but it was just exactly what I wanted on this particular day so I have no complaints.
Honestly, I could keep raving on about how good this was for quite some time. Hubby was saying I should try this or that from his plate but I just shook my head no hoping I wouldn’t have to return the favour. I didn’t want to share today!

Hubby was undecided and nothing on the menu particularly stood out for him today so he went for a platter and some beer battered chips. 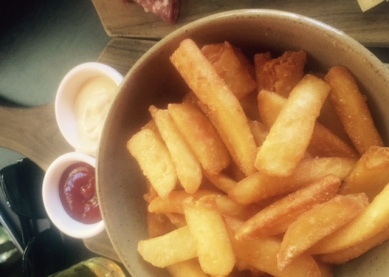 I love how the fries have a “rustic” look. That’s pretty much how everything I cook comes out…
The fries came with a smoked aioli and tomato sauce. I couldn’t really taste the smokiness (yes I did taste some of his) but it was still nice.
The platter was on the menu as Fleurieu Platter – Dips, Cheese, Olives, Cured Meats served with pita bread.

Hubby kept looks for the “dips” as he could only see one, but there is definitely an “s” on that menu description. Unless the Olive Oil/balsamic bowl was classed as a dip?
The Pita was toasted but cold and hubby’s preference would have been for them to come out either toasted warm, or just soft.
Everything on his plate was beautifully fresh though and it did look pretty good! That dip had a Moroccan Season type flavour. I’m not sure what it was but I liked it more than hubby did (yes I tried that one too!)

You can’t see it in the picture but the platter also had half a pear and some rock melon on there. I think it was not bad value at $18! And those fries he ordered were $8.
My pie was pretty reasonable at $22

There were a few things on the menu that I wanted to try (including pierogi!) so I will definitely be back and if you haven’t been to the North Adelaide, I strongly urge you too!!

However, it probably is NOT a good idea to walk to the local supermarket and purchase a litre of icecream to eat in the privacy of your car (Away from prying eyes) after your lunch at the North Adelaide Hotel. Not that I’m saying we did that….

Have you been to the North Adelaide Hotel?
What did you think?
Let me know in the comments below!!

We see a platter that captures hubby’s attention for the duration of our meal – unfortunately it was not on OUR table…
An unexpected salad bar sighting has hubby in raptures and..
We experience a burger without the works….

Diners today we were at The Sussex Hotel. We got here quite by accident because we’d actually gone into another establishment a little down the road and after sitting down and looking at the menu for over five minutes, hubby and I looked at each other and said “you know, there is another place down the road….” And that other place was the Sussex!

I was so glad we’d decided to come here instead because from the moment we walked in the mood was different. The staff were really friendly and there were lots of people eating what looked to be good food! Hubby was sold as soon as he saw the salad bar.

They’ve got a couple of different dining areas. We chose to sit inside, but overlooking the nice outdoor area. There was a tv screen, music playing, people dining – all made us feel comfortable and welcome.

We checked out the menu but hubby was having a hard time because he couldn’t get his eyes off the table next to ours. They had ordered a share plate that just looked phenomenal. I later tried to find it on the menu online, and although there is a share plate listed on there, I don’t think it’s the same as the one we saw. A couple of girls had ordered it and it had all sorts of meats on there which was not in the description I saw for the share platter online – Ham, salami, that kind of thing! Hubby was almost begging me to get that with him but I just didn’t feel like eating finger foods. He contemplated getting it on his own I’m sure…

So after ordering we went to check out the salad bar.

I must admit, I didn’t check out the cold salads really.

They had the general fare- scalloped potatoes, creamed cauliflower, broccoli and beans… It all looked ok. Some things tasted better than they looked – not sure if that’s a good thing. I was a bit disappointed with the bread. It was just regular sliced bread, not cute little dinner rolls as I would have liked.

Now on to our mains!

I always rib hubby that I order better than him and today, it was true once again. 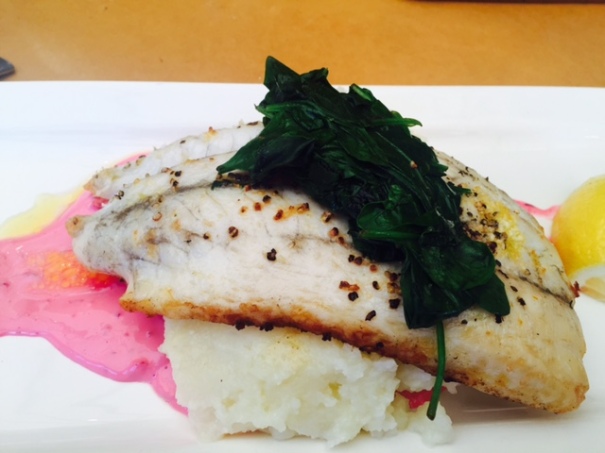 I don’t think there is anything I could fault about this dish. Look at how pretty it looks on the plate. That beetroot hollandaise really is a gorgeous colour!
Looks are one thing, but this dish also had taste. From the greens on top to the Barramundi and mash on the bottom… everything was a pleasure to eat. I was really hoping hubby wasn’t going to ask me for  a taste because I didn’t want to share. The peppercorns on top of the barramundi lit up my tastebuds! The dish itself was also temperature hot which I loved. I would definitely have this dish again.

Hubby went for the Sussex Burger.

It looked pretty good when it came out. Surprisingly, it was the only burger on the menu… unless we missed something?? Hubby thinks he even saw a sign boasting they had the best burgers in Adelaide (plural) but this was the only option on the menu.
As he was eating it he realised there was no cheese, no bacon, no egg… and we didn’t have the option of asking for these to be added either.
The menu does state that it comes with cheese, but there was none in hubby’s burger. He said the patty seemed too small compared to the size of the bread and seemed a bit mushy. He did like the bread though. I would have liked it toasted (it wasn’t).
Overall it was really disappointing for him. There was nothing “bad” about it, it just wasn’t what he’d expect to get when ordering a burger.

You have to remember that as he’s eating this less than perfect burger, he’s still ogling the next door table with that share platter. They had to end up getting a take away container as they weren’t able to finish it all and I had a teensy weensy bit of guilt as hubby kept muttering “I never get what I want” – which for the record, is a lie.

I feel that there were mostly positives about our trip to the Sussex today and I would definitely recommend this place – perhaps just don’t order the burger!

Have you been to The Sussex?
What did you think?
Let me know in the comments below!