We’re nuts about nuts,
We must have looked very, very, very thirsty and
I told a waitress “I’m a big eater” in a solemn and serious voice.

Diners today we were at Lone Star Rib House at Glenelg.

Lone Star took over the building where McDonalds had been located at Glenelg.

You may recognise it from the picture.

Hubby and I had been here quite some time ago, before I started reviewing, and didn’t have a great experience. While the food was ok and the serves were large, the dishes took a VERY long time to come out and the restaurant wasn’t full. In fact after about 90 minutes I had to ask a waitress if we were going to be getting any food…
When I checked out other reviews online, I found this to be a common complaint.

However some time has passed since that visit and I was curious to see if anything had changed.

There were four of us in our party today. When we walked in, a server greeted us immediately, gave us a bucket of complimentary nuts and took us to a table.

I have to say, I love the decor in this place. I love the wooden benches, the brick walls and the decorations on them, and the country and western music that plays! It really sets the mood and gives you an expectation of the food you will receive.

Hubby and I greedily ate through the nuts while Miss 22 and Mr 21 watched in astonishment. We barely stopped to give the waitress our order. It was a little embarrassing but we didn’t care. We could have only looked more “Bogan” if we’d started shoveling them into our purses…

On first sight the menu seemed quite big but there were a lot of similar options on there. For example, lots of different burger, hotdog, and schnitzel options that took up a couple of pages. They did have a few chicken and fish options too. As far as meat went, they had one Steak, one T-bone and a Prime Rib option. I thought for a “meat” place, there really should have been a few more steak options.

I didn’t know what I was going to have when I saw the nachos with chili con carne option in the “Teasers” section of the menu. I really had a craving for nachos but wasn’t sure this was going to be a big enough serve. Embarrassingly, I asked the waitress and she said it was a substantial serve but I told her quite seriously “Are you sure because I’m a big eater”.
To her credit she didn’t react like she was talking to a crazy person and showed me the plate it was served on and that sealed my choice.

Miss 22 is a vegetarian and was a little worried about menu choice. I guess you can’t really expect vegetarian options at a Rib/Steakhouse however she did find a vegetarian burger.

It looked like a pretty good size dish. She said the veggie patty was mostly peas and corn which is not her first preference but it still tasted ok and said the beetroot gave the dish a nice sweetness.
I tried one of the fries later on and thought there was a heavy old oil taste but I could be wrong. They were seasoned really well though.

Mr 21 went for the smaller sized T-bone with a Garlic Shrimp Topper add on.

Everything looked really fresh. He really loved this dish. He said the meat was cooked well and was really well seasoned too. The salad was fresh and colourful. His only complaint was that the mashed potatoes were a little lumpy… it’s a wonder he didn’t think that was normal considering the mashed potatoes I’ve served him in the past…

Hubby decided to choose from the “Teasers” section also.
He chose the Amarillo cheese fries (With cheese and bacon) and the Lone Star Tex Mex Chili

The fries were quite a generous serve and had a good amount of cheese on there, just like hubby likes it! He said the chili was really good too. He certainly didn’t have any complaints.

I was in raptures when my nachos came. Nachos all to myself!! I was so excited. 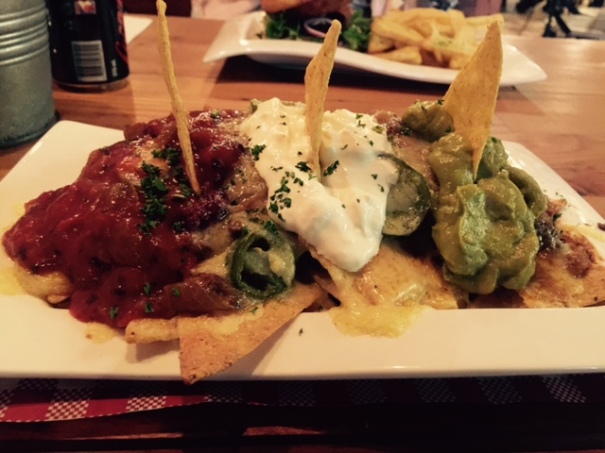 The dish was large enough for me and the topping were really good. I couldn’t have any complaints about this. I enjoyed every mouthful. The only thing I could have wished for was perhaps a little more chips, but that’s only a minor complaint.

The food came out pretty quickly! I was pleasantly surprised.
The only minor annoyance was that we were asked at least three times if we wanted more drinks, and this was while we all still had full glasses!
I guess the servers are told to really sell, sell, sell but it was just a little annoying when you’re having a conversation, to have to stop and tell the server “no, we’re fine for drinks thanks”

When the bill came I thought “My god this is cheap!” and then realised our food was not on that bill. They’d brought us a different table’s bill.
It ended up being half of what our bill was and I almost wish I “hadn’t noticed” and just paid the wrong bill… I thought the server could have comped us a drink or something for my honesty but no big deal.

In summary, Lone Star have definitely given us a better experience this time around. The food is reasonably priced and mostly presented and cooked well. The serves are generous and… there’s always that bucket of complimentary nuts!!!

Have you been to the Lone Star at Glenelg?
What did you think?
Let me know in the comments below!