Today is our second to last full day here in Greece.
I’ve not been able to find diet soft drinks (soda) here apart from Pepsi Max or Sugar Free Coke.
The same thing happened when we were in Japan although I did eventually find it in the odd store here and there.

Here in Greece, I’ve looked in many places and just can’t find it.

In Australia, and I imagine in Canada and America, there are huge selections of diet drinks. These countries also have the highest obesity rates.  Makes me wonder if there is any connection.

Had to laugh at the name of this store (left).

Wasn’t sure if I was actually reading it correctly at first!

Speaking of walking, in Australia we drive on the left side of the road and consequently, when we walk down a footpath, we also keep left.
I keep wanting to keep left while walking here, but they’re used to keeping right. Everyone sub -consciously walks on the side they’re used to being on.

We drove to Kifisia. Such a pretty place and again, different to many of the other places we have been to in Greece. Kifisia is an upscale residential and shopping district with international designer boutiques, exclusive leather goods stores and art galleries. Imagine my surprise when I saw the store pictured above because that’s where that picture comes from.
There are pretty park lands in the area too.

Here are a few pictures I took as we walked along. 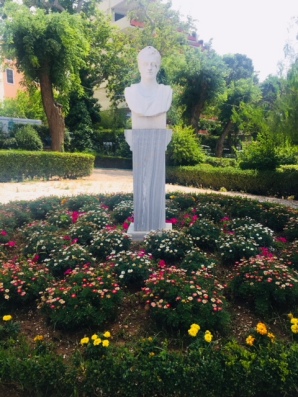 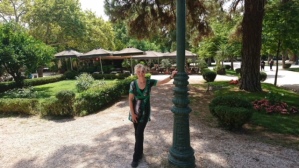 Not many pictures – I thought I took more.

We stopped for lunch and the place we went to didn’t have Greek Salad on the menu so we were forced to be adventurous which turned out to be a good thing because the salad I ate was so delicious with raisans and slices of orange in it. So good!!
We also got some pizza. 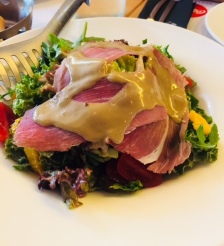 I can’t remember what the dish on the far right was called but it was mozzarella wrapped with eggplant and in that delicious tomato sauce. Again, soooo good! 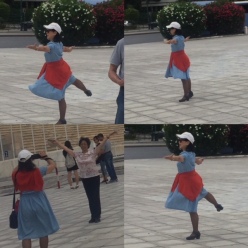 On the way back we passed by the Original Olympic stadium. The Panathenaic Stadium or Kallimarmaro is a multi-purpose stadium in Athens.

Hubby and I went to take a look and noticed so many people posing in front of it.

Some people were doing star jumps, others were doing John Travolta style dance poses.
It was fun to watch!

Of course, that meant I had to join in. Hubby and I tried to get some star jump pics in but I failed – I should really post the fail pictures because they were way funnier than these but I guess I still have some dignity left so I better work at keeping it. 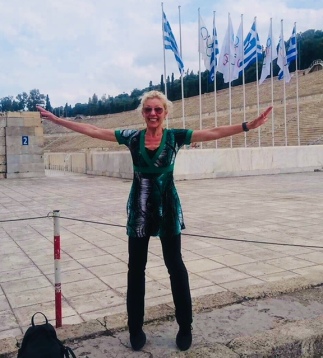 And now for some other pics we took that don’t involve posing or star jump attempts. 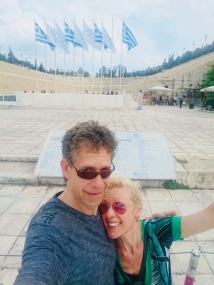 I lied, there was a bit of posing involved.

Oh and we noticed you could see the Acropolis from here too if you looked hard enough!

I like how the traffic sign here tells you how long you have to wait until you get a green walk signal.

And a few more pics from the surrounding area… 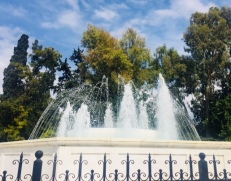 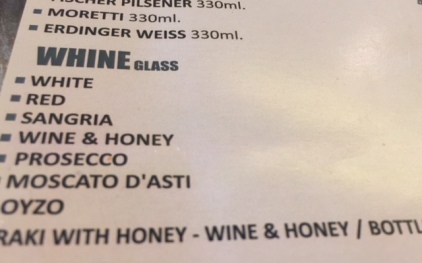 Had to laugh at this – I don’t think it was a typo, it probably means something but it was still funny to me.

Tonight for dinner we were back in that Plaka area – The same area that we caught the subway from where hubby’s wallet was pick-pocketed. I noticed there were quite a few people wearing their bags and back packs in front of them so I did the same even though I felt silly doing it.
By the way, Pláka is an old historical neighborhood of Athens, clustered around the northern and eastern slopes of the Acropolis, it incorporates labyrinthine streets and neoclassical architecture

Our company chose a fantastic restaurant where two guys were providing some great Greek entertainment.

I did take a video later on in the evening when a couple of the diners… or one may have been a server, got up to do some Greek dancing! I took my phone out to video it and then looked around and there was at least one person from every table recording it!

Tomorrow is our last full day here and then a surprise awaits…. Stay tuned.