I woke up with mixed feelings. Sad to be leaving Greece but also excited for what lay ahead. I’ve been to Italy before but it was too many years ago and hubby has never been at all so this was going to be something new for both of us.

It was sad to leave the rest of our travelling buddies who were going back home today. After being with the group for so long, it a little strange to just be on our own. I kept thinking we were missing somebody.

When the group got to Athens airport we saw that we were departing from different gates and had to go through different security screening areas. We asked the security officer if the gates meet up on the other side as we wanted to know whether we were saying goodbye now or if we would have more time together.
The guard said in a heavy accent “No, it separate. Say bye-bye here”
It was just cute.

The goodbye was too quick and too sad…

The flight from Athens to Rome was only 2 hours and it seemed to go fairly quickly. I had last minute anxiety about speaking Italian so was reading the Italian inflight magazine for most of those two hours in the hope it could increase my vocabulary.

Hubby and I had researched it and decided we would take the bus to our apartment which is pretty close to the train terminal in Rome.
I tried to take some pictures as it drove along but that never works.

Some of the streets were so pretty with green trees shading us but the buildings are all full of graffiti! We saw the same thing in Greece. What is it with these places and graffiti!

We kept driving and then… out of nowhere, out jumped the colosseum!! I think the whole bus exclaimed at the same time! 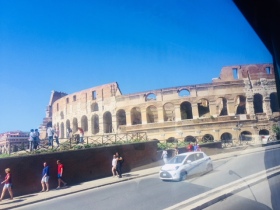 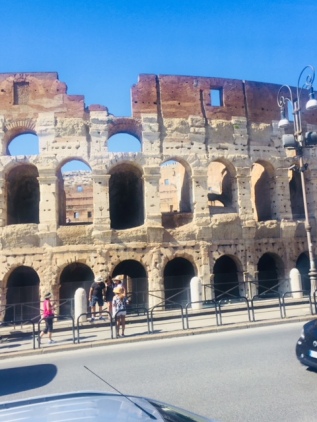 It looked pretty impressive. I’ve seen it before but it was still a thrill.

Our apartment is just a short walk away from here and we just fell in love with the building as soon as we saw it!! I was so happy that it was as nice as the pictures we’d seen online. Maybe even better than the pictures.

The picture top right is the ceiling in our apartment. It’s curved like that. Looks pretty good! And the ceilings are so high! It feels like were in a palace. I love this place!!

We were going to rest and take it easy but got caught up in the atmosphere and immediately went out exploring. I snapped at things without knowing what they were. Tomorrow is the “proper” sight seeing day. This was just a bonus walk. 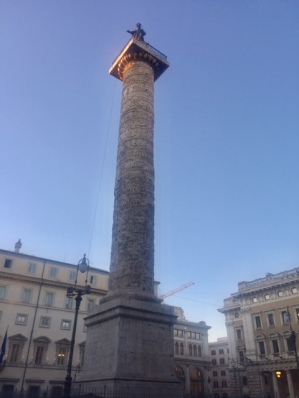 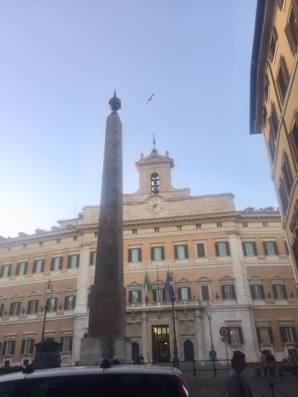 We stopped for some dinner. We really wanted authentic pizza but not sure we got that. The place was ok but not amazing.
We also ordered a bottle of wine for both of us. Although I drink often, I don’t drink a lot and a whole bottle between two… well I can tell you my Italian was flowing after that. 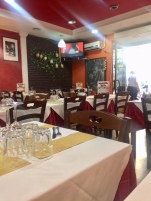 The first picture above is the restaurant we stopped at, the second is our wine, third our meals (pizza and calzone) and last is the complimentary limoncello the owner brought out! How nice was that!
We passed a million tourist shops and lots of them sell these things. I haven’t gone in to see what’s in them, but I’ll just leave the picture here for you to see. Try explaining that one to your kids.

Without looking for it, we came upon Fontana di Trevi, 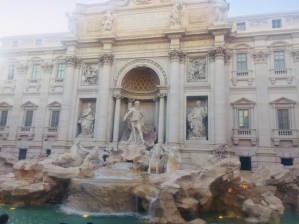 It was pretty impressive. Much more than I remember when I was here last.

We are going to go to these sights again so we didn’t linger. In any case, it was absolutely littered with people. We were here in the evening and I’m sure there’s people here all day long but probably especially busy at night.

I accidentally dropped my phone on a young girls head while trying to take an overhead shot of the fountain.
I still feel bad about that but it probably would have been a little funny watching it as an onlooker.

I joked to hubby that if we kept going the way we were, we would see all the ancient sights before we even had our first night’s sleep!

We passed by the Pantheon and again, that was quite by accident.

We saw a sign for Piazza di Spagna (Spanish Steps) and decided that would be our last stop before heading back.
It was starting to get dark so I couldn’t take many photos. I was telling hubby how when I was here last there were vendors selling chestnuts at the bottom of the steps and they’re still there! You might see some chestnuts in the picture on the right.

Very weary but I want to show you the fabulous parking that people do here. Why stick to one direction when you have one of these cars?

Backwards, sideways, parallel. It all works!