For those following on from yesterday’s entry, the TV is still on mute. I don’t understand why hubby is so invested in unmuting it. It’s not like we can understand Japanese.I feel like this is a decidedly male thing.

I felt pretty Japanese today in my floral jumpsuit and cute little socks.
I couldn’t imagine wearing these back home but I love that I can wear them here.

We are still finding things to do that we haven’t done on previous trips here and one of them is visiting Arashiyama Bamboo Grove near Kyoto.

We walked to the train station.

Look at all the bikes parked at the train station! Everyone rides here.
From 3 to 103! All on bikes!

When we got inside, I wanted to check the price of the ticket and the train lines we were going to catch. I went up to one of the service guys and said very politely “sumimasen” and asked my question. He confirmed “Train to Kyoto?” and instead of saying “yes” in Japanese or even English, I said “si”. Full credit to the Japanese who are always polite, he either didn’t notice or pretended he didn’t notice.

Hubby and I got to talking about the language and how much we were learning and he wanted to write down the words he knew.

He said he was going to do it phonetically to help with pronunciation.

I still giggled when I saw his list though.

We managed to almost catch the right trains. I feel like it’s a stress every time. The only mistake we made going out was we went on a local train instead of the rapid express. That meant that it stopped at every station and took well over an hour, rather than 30 minutes or so. 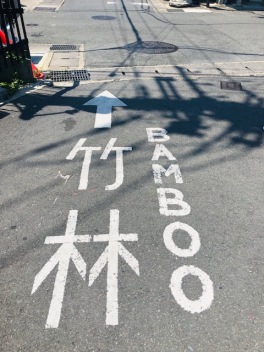 When we got to Arashiyama, we didn’t quite know what direction to walk in but we soon saw a big hint!

This is a pretty  place. There’s lots to see here and tons more than what we saw today but I wasn’t sure if I wanted to see the monkeys and hubby definitely was not in the mood to walk up hill with today’s temperature so we figured we’d leave that for our next trip to Japan.

I had read so much about this bamboo forest and the pictures I’d seen online had been so beautiful that I think  I’d really built it up in my head.

What we saw was spectacular, and maybe I would have enjoyed it more if there weren’t three million other people trying to enjoy it with me. Never mind, I’m still glad we went. 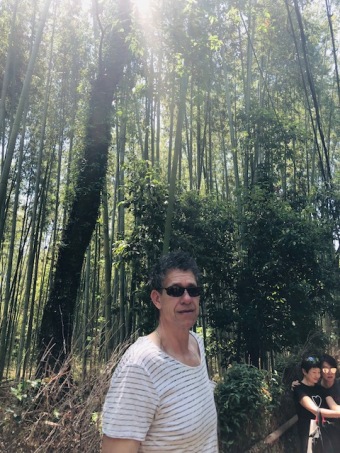 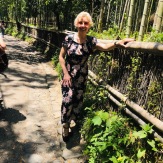 I don’t know if you noticed the sign there that asks people not to touch the bamboo shoots as this will cause them to stop growing. It seemed like everyone was touching everything!

We had a look at the old trains that were right by the station. They were so big. It was pretty impressive.

After a while we headed back into Kyoto to get some lunch.  We went into the basement of the Kyoto Tower as we remembered there was a food court down there.
The food I got was amazing! It tasted so good!! Rice with some kind of meat on there. We asked for an English menu but I still didn’t really know what it was. Hubby got some kind of ramen and he was happy with his too. These dishes together cost about $15 AUD. That was pretty good value I thought!!

And from where we were sitting we could watch and listen to the cooks.

Next stop was going to be on the other side of the canal. We wanted to find the pathway that led up to the Kiyomizu temple.

I really wanted to go there because I love the walk up. Again though, there were three million other people who had the same idea as us and although I loved being there, I can’t say I enjoyed the experience. I couldn’t even look in any of the shops because it was just too hard to get from one side to the other with all the people.
But here are some pics I took along the way from Kyoto to the temple. 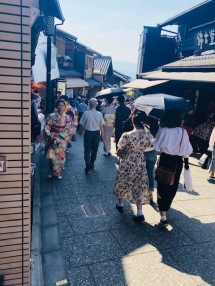 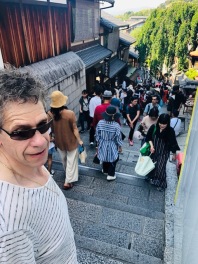 We were thirsty and bone tired by the time we got back to Kyoto. We wanted to stop and get a drink in the British Pub there. We’ve seen them about the place but have never been in one. When we got in, the server told us the only room they had was standing and all we wanted to do was sit so, again we missed out on that.

I love the Kyoto station. The design and architecture are just out of this world. If I hadn’t been so tired I might have enjoyed it a little more. 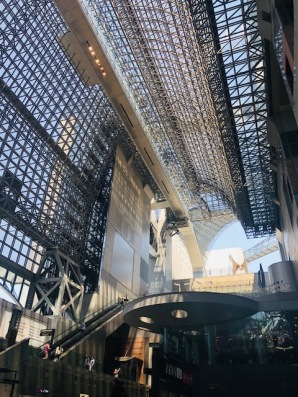 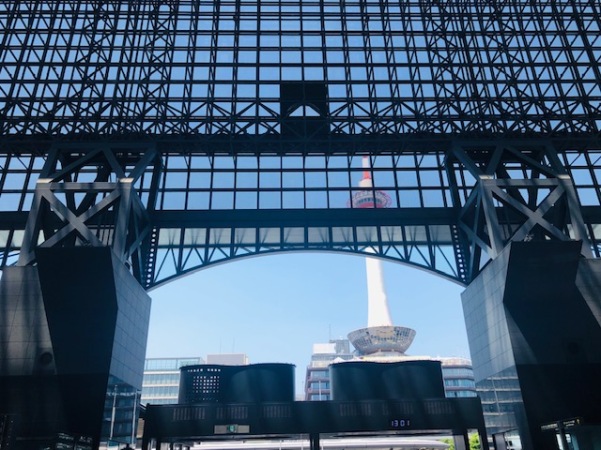 We’ve been stopping in at Lawsons/Family Mart far too often for snacks. Today we really felt like we needed a treat though so we loaded up and took it back to our apartment to enjoy in comfort.

I may have complained a bit in this entry but honestly it was a great day. I loved seeing everything we did and being in Kyoto. I even didn’t mind the couple of wrong turns we made. It always makes the day more interesting.

I will definitely sleep well tonight!

I know I’m always going on about the Supermarkets here but honestly, it’s just so different to what we’re used to.
We made another midnight supermarket run last night and I took a few snaps of the food just sitting out on the benches unrefrigerated.

As you can see, some of the items have egg in it. Just sitting there on the bench waiting to be bought by someone. I must admit, I’ve been tempted to buy some of it. I mean they wouldn’t sell it if people got sick right?

In any case, today was Kyoto day! I tend to get up quite early so I thought I’d go for a walk and let hubby sleep a little longer. Streets in Japan can be quite confusing as they don’t follow the nice parallel lines that I’m used to however I had internet with me and google maps is always available.
I took a few snaps along the way.

One thing I didn’t know about Osaka until I visited for the first time is that it’s full of canals. It’s the Venice of Japan.

It wasn’t long before we were off to Kyoto. We’ve been there twice before and had very different experiences. Today, again, it was like we were visiting for the first time, seeing things we hadn’t seen before. This city just amazes me. 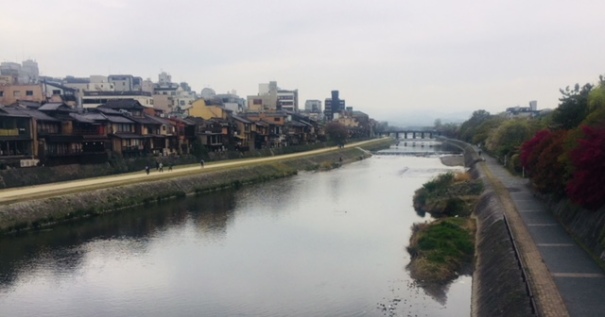 Straight off the train we cross the river into the main part of the city. This place was so full of tourists today! All colours, all sorts of different accents.

After a little snack we headed on over to the Gion district. We had stumbled onto this section by accident last time and just fell in love with it. It’s just olden day Japan. People can hire traditional clothing and walk these streets. So many people do it! It really adds to the atmosphere. 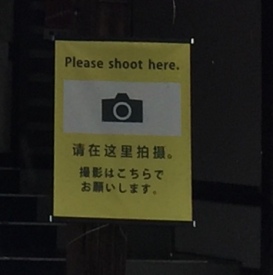 The Japanese are so helpful.

See that yellow sign in the picture above on the left?

Here is a close up of what it said.

And I’m glad they clarified by adding the picture of the camera.

We walked by instinct. We were searching for the  steps that had rows of shops alongside. Before reaching that area though, we came to some beautiful tranquil gardens. 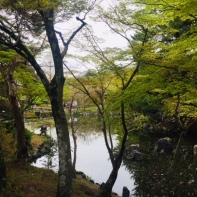 At least it would have been tranquil if we weren’t sharing the space with 50 million other people. 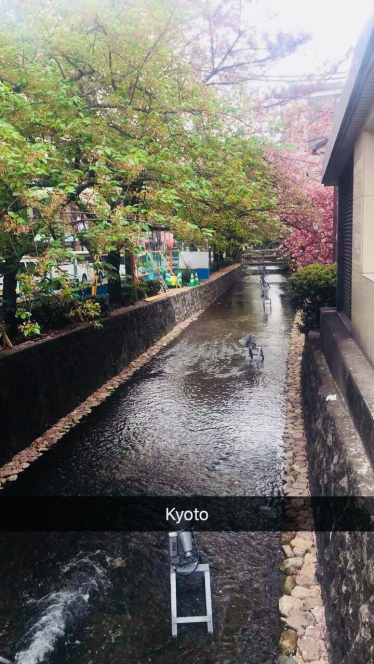 And then, the steps! 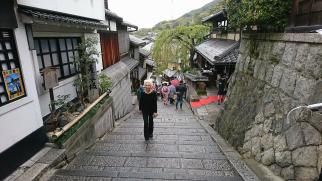 Sorry those photos aren’t in order and I didn’t take as many as I thought I had. The last two are just random pictures along the way. The left one is of a sacred cemetary and on the bottom right is bamboo. We wanted to go to a bamboo forest but we didn’t plan well so when we saw this, I just took the picture to make myself feel better.

After browsing the shops full of wonders, we came to the top. I should probably know what this is but I don’t have the info with me right now. I’m so full of information right. 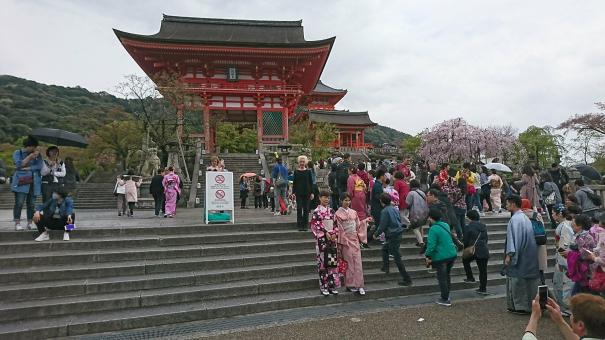 It’s a bit of a climb but well worth it! 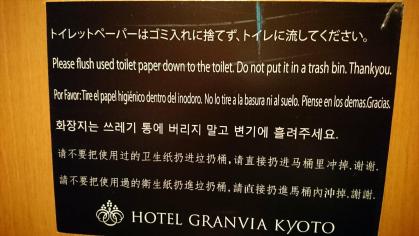 We decided to go back to the main centre to get some lunch. It was udon noodles today and I’m pleased to say we didn’t gorge ourselves!! 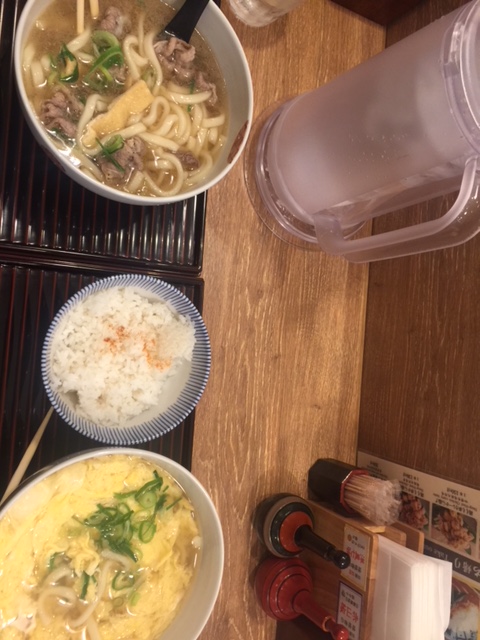 When you go into a restaurant here, they give you a little basket to put your bag in so you don’t have to leave it on the floor.

And although hubby told me “NO CAKES” this holiday, he didn’t fight me when I suggested to go and get some pastries. OH MY GOD they were so delicious!!!! 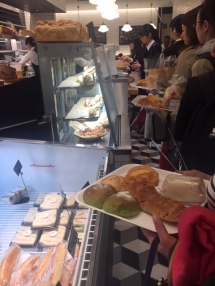 It was so hard not to grab one of everything!

We walked around the amazing Kyoto Station for a while. It has a department store, hotel and lots of shops and restaurants in there. Such an interesting building. It’s a worth a visit even if you’re not catching the train.
It’s such an amazing design with new things to see at every turn. 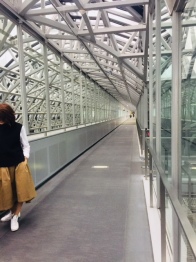 I didn’t take many photos this time as I took so many last time.

It has been raining most of today so we didn’t really want to go out walking in it again. We decided to get the train back to Osaka and continue our adventure there.
Poor hubby was wiped out and joined the majority of Japanese people who sleep on the train.

And please let me indulge in some more supermarket talk.
I was feeling brave tonight and bought a whole of things even if I didn’t know what they were.
Amongst my purchases were the following. 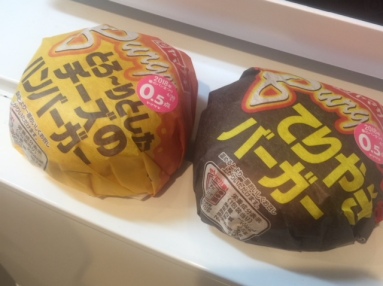 The burgers on the left were 98 yen… so about $1.20AUD. We shared the brown wrapped one and it was actually ok.
Better than I expected.
Not anything that would fill you up but ok for a quick snack. The bread is really so light that you hardly feel like you’re eating anything.
We haven’t tried the yellow wrapped burger yet and I haven’t put my translate ap on it so I don’t know what it is. Somtimes it’s better not to know.

The pic on the right were pieces of pizza sold individually. They were ok too. Better than expected. Even the one with egg on it.

I sent that picture to my mum and she said she’d rather have egg than pineapple and I’m not going to give you her contact information as hate mail is just not nice.