Woo hoo and we’re off again!

Before leaving for Canada I did a little google search on what to expect when travelling to Canada.
Although I’ve been here a few times before, I just wondered what the opinions were out there.

I was mostly familiar with everything I read, but I did have a chuckle when one page mentioned the “oot and aboot” thing and the article said most Canadians get offended by that. They all deny they do it.

Even though I like to tease my Canadian hubby about it, he doesn’t 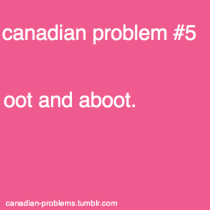 really  say “Oot and aboot”. Mostly, it sounds more like “Oat and Aboat”
He wasn’t too impressed with that observation either.

Unfortunately I’d come down with a throat and ear infection days before we had to leave. I blame the sickness on the fact that I almost left my handbag when we went through security! It’s not like I took a few steps and remembered, I was halfway to the gate when I started to think something wasn’t right. I was travelling “light”
Hubby was in his own world when I started hyperventilating and calling out his name.
“I have to go back to security, I left my bag there!!!”
Who does that??

Oh and I didn’t take a pic of us together, but wanted to show you how we colour coordinated our outfits. Not on purpose!!! If we had noticed one of us would have changed for sure. We were both in pink and black. 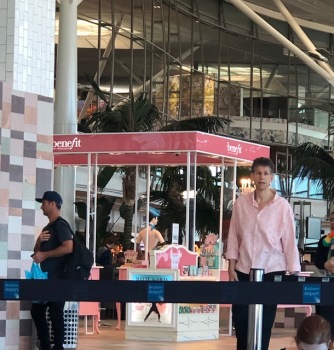 Flying is  fun isn’t it? The most exciting thing is wondering what nature of food we’re going to be served and how long is it going to take to get to us.
“Have they started yet? I think I can smell something” “What’s cabin crew doing? Have they got the trolley’s out yet?” “Do you think they’ll start from our end or will we be last?”

On one of our flights, we were towards the end of the plane and almost last to be served. The choice was pasta or falafel salad. It wouldn’t take a genius to figure out that the interest in falafel would be low right?

Very disappointed to be told there was no choice. Falafel for us it was.

But I’m sure you didn’t come here to read about how obsessed over food I am.

The flight from Brisbane to Vancouver was thirteen hours.

Such a long time.
The plane was pretty full but it was fairly roomy too so no complaints. It was a 787 Dreamliner if that means anything to you.

We were also at the start of the food serving line AND we found where the snacks were stashed and helped ourselves regularly throughout the flight.

Now we’ve got a a long wait before our next flight but it gives us a bit of time to charge and recharge our devices and perhaps communicate with any Australians who choose not to sleep during the night hours.

6 thoughts on “Oot and Aboot in Canada Eh!”