A steak right to hubby’s heart
A diner gets as fresh as the salad bar and..
I find out what lamb florentine is and marvel at this gastronomic brilliance! 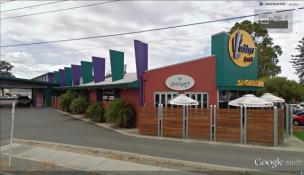 Today we are at the Lockelys Hotel.

Hubby and I were a little hesitant in coming here because we had the impression it was a dive.
In fact he said to me “We don’t have to stay there. If we get there and don’t like it we’ll leave”

But we didn’t have to leave and I’m glad. It ended up being one of our best dining experiences.

We had to wait for dinner service to start because again, we’d missed lunch and were ravenously hungry at 5pm.
We took ourselves into the Sports Bar to wait. It was very busy and loud and noticeably, I was the only woman in there.
The bar staff were lovely and the fireplace was heavenly! 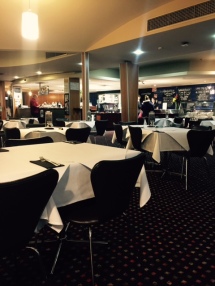 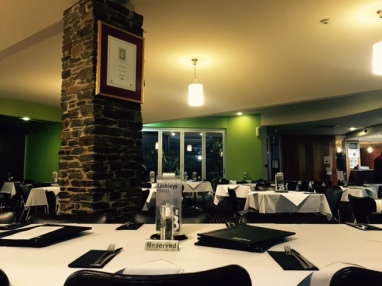 We went over to the Bistro area when dinner service started and hubby was in heaven because unexpectedly, there was a  salad bar there and he’s just so enamored with them at the moment.
We were sat close to where diners were coming in and it soon became apparent that a lot of them were regulars. There was good banter between servers and customers and in fact, one cheeky old fella was chatting up a pretty young girl while his wife was standing next to him!
But it was all in fun.

The menu was simple but good. As I walked up to the counter to order I still didn’t know what I was going to have. Hubby went for the 400g Portherhouse Steak.
At the counter I noticed the specials board and I ordered the Lamb Florentine without really knowing what Florentine was… in fact, not knowing at all – no inkling – nothing.
I’m not normally that adventurous.

We watched other food coming out and it all looked sooooo delicious!!! So many people were ordering the sliders. The servings looked large and were just mouth watering.
While we waited for ours we visited the Salad Bar and although there wasn’t a huge selection, what was there was fresh and quality. There were only cold salads including a potato salad, beans, pasta salad etc etc but everything was tasty and it didn’t seem to be an afterthought as some salad bars tend to be.

Then our food came.
They  both looked so good!
We have had food that looked good and didn’t taste good before though…
Hubby sliced through and saw that good juicy pinkness and was encouraged – the taste was even better than he could have imagined. Tender, melting in his mouth like butter.  He didn’t even want to have it with the sauce as he said that would ruin the taste.
He also said that every little bit of gristle had been removed and every mouthful was that tender goodness.
I wouldn’t know because he didn’t share any with me even though I shared mine. He said it was too good to share.

I was equally happy with mine. I had no idea what it was going to be but when it came, I saw the lamb had been wrapped in pastry that was lined with spinach and bacon. Yum!

It was a big serve too! The first thing I tried was the mash which was just divine! It had mixed in with that wonderful jus and I don’t know what else was in there but it was just such a pleasure to eat.
The pastry from the lamb florentine just flaked away beautifully and the spinach was a really nice taste balancer. I really loved this dish and we both took our time eating our meals.

If I have to have any negatives it’s that there was no dressing in either of our salads and while the servers were nice and friendly, it did seem like they were just doing their jobs and not really interested in whatever you might have to say – but I’m being very harsh and this is a bistro after all. They certainly weren’t rude. I think they just would benefit from more experience.

The website site for the hotel says they have a new chef and this is a new menu. I’m not sure how long he’s been there but he’s a wonderful addition if this is the food he’s producing. It’s not often that hubby says “I want to come back here” after he’s only taken a few mouthful’s of food!! He even said that this is the best steak he’s had in at least six months so there you have it!

Definitely a huge recommendation for us.

Have you been to the Lockleys Hotel?
What did you think?
Let me know in the comments below!