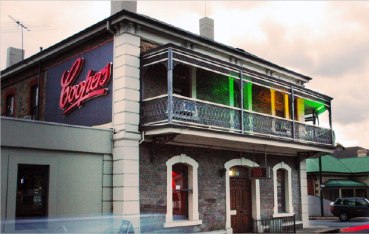 It’s been quite a few years since I was last at The Robin Hood Hotel and if I’m remembering correctly it was a bit of a dive at that time.

Since then, I think it’s had a makeover and I’ve been hearing good things about it so I’ve been wanting to go back and have a look for myself.

My first impressions were really not that great. Hubby and I wandered in from the back entrance looking a bit aimless and lost, and no-one asked us if we were there for dinner, or just wanting a drink.

Finally I found a waiter who told me to grab a menu, have a drink, then come back and order from the bar…
It turned out to be a little more complicated than that. I had to order food from one counter and drinks from another. Stand in one line, then stand in another.

The menu itself was pretty cheaply done and not very exciting to look at which is a shame really, as the food turned out to be surprisingly good.

Hubby and I decided on the Meat Sampler tasting plate and we ordered some sourdough bread and dukkah too.

There were a good amount of people seated in the outdoor area where we were. It was fairly comfortable and there was a large screen TV showing a live AFL game.
Unfortunately there was some unidentified animal droppings at the end of my seat. I guess you have to expect that kind of thing in an outdoor setting.

The bread came out fairly quickly and any minor irritations up until that point instantly vanished. It was warm and crusty and was quite a generous serve. When I broke it apart a puff of steam was released. The outer was firm and crunchy but inside the dough was soft and warm. It was so delicious even before I added any dukkah to it!  The dukkah was also so full of flavour. I  would have loved to have known what was in there. We had no trouble finishing up every speck on that dish!
I’d forgotten its description from the menu so I didn’t realise we also had some babaganoush. I’m not sure I’ve had that before.
It was very creamy and tasty although I have nothing to compare it too so I don’t know if that’s the way it’s supposed to be.

We tucked into the two sliders first. I’m not sure which I liked more. The cheese burger slider was delicious but I feel like I’ve had that before. It was fairly simple but the meat was thick and juicy and the mustard complimented it nicely. No “wow” factor but enjoyable all the same.
The pulled pork slider was equally delicious although I couldn’t taste a huge amount of pork. There was coriander in this slider which gave my mouth a nice “yum” explosion

The Onion Rings were a little disappointing in that I couldn’t really taste the onion. Hubby and I had onion rings recently and the onion was deliciously sweet. The ones on this plate were lost in the batter. The wedges were battered lightly and  were crispy and fresh. I really enjoyed them and thought their shape made them a little more interesting than having normal wedges on your plate..

Another item on this tasting plate was the crunchy chicken skewer. I’m not a huge fan of chicken but these were chicken thigh fillets so they were very tender and moist and the crusty outer was so tasty. 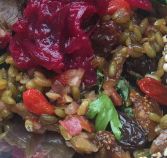 Next to the chicken skewer was an interesting salad. On the menu they called it freekah and Greek salad. I think the only thing “Greek” about it was they had bits of feta in there but it was absolutely delicious. Feta, freekah, beetroot, almond, goji berries, sultanas… it would have been very sweet but when you ate it with the rocket, it balanced beautifully. I’m going to try to make this one at home!

Lastly, there was lamb on the plate. Lamb is normally my favourite meat but I found this to be very dry however it was still tasty. Maybe that was my lamb bias showing…

As I said, the food was surprisingly good and I’d love to go back there and try a few other items on the menu!

Have you eaten at The Robin Hood? What did you think? Let me know in the comments below!

Till next we chow….

3 thoughts on “The Robin Hood – Norwood”